BEFORE I began a course in Wildlife Illustration in Carmarthen, West Wales, I volunteered to work on Llanddwyn Island, in North Wales. Although I worked as a warden on several nature reserves during college holidays, including Skomer Island, in Pembrokeshire, the Dyfi Estuary in Mid Wales and have continued to carry out conservation work throughout my life, the small island of Llanddwyn – that lies off the West coast of Anglesey (‘Ynys Mon’ in Welsh) – has a special place in my heart.

The scenery is spectacular and the legend, natural history and geology of the land make it a truly fascinating place. Llanddwyn Island is part of the Newborough National Nature Reserve and Forest, Anglesey, which also includes Newborough Warren’s dunes and areas of coastal sand flats and saltmarsh.

Llanddwyn translates as ‘The church of St. Dwynwen’. Dwynwen is the patron saint of Welsh lovers — the equivalent of St. Valentine. This is celebrated on 25 January, often with cards and flowers. The island hosts the remains of the church, and the beautiful ruin overlooks views of the Llyn Peninsula, framed by its crumbling old stone windows. Llanddwyn island also featured in the television series ‘1900 Island’ and was introduced as a place where no one had lived for 70 years — but it wasn’t quite that long ago that I had lived there. Of course, the show meant permanent residents, whereas I had spent one long, hot summer there in the early 1980s.

I agreed to visit Llanddwyn with a friend from college to gain more practical experience. I recall meeting the warden at the train station, not knowing what to expect. We travelled along a coast road that I was familiar with from undertaking lichen surveys of churchyards for my dissertation. And as we passed villages along the way, each churchyard seemed familiar. We drove onto Newborough forest, through the shaded trees and down to the beach where I’d canoed with fellow students. Then, further into the forest glades, past stands of Cladonia lichens thicker than I’d ever seen before, I came across spectacular views of the mountains and the Llyn Peninsula.

We travelled to the furthest point of the long, sandy and expansive beach. The island is only cut off at high tide and there’s often a wet length of sand to cross here. Our Land Rover ploughed on through the sand where pillow lava rocks, left from ancient volcanic eruptions, rise jagged and black on either side of the island approach.

Driving up a small incline on the quiet earthen path, my eyes opened wide as I took in the exquisite view. Birds sang and bees buzzed on either side of the track, while waves crashed in an azure blue sea. Then, over a low ridge appeared a row of tiny cottages which would be my home for the next few months.

The older deputy warden greeted me in a gruff manner, initially suspicious of me, as I don’t think he felt I was up to the task at hand. Despite that summer turning into a boiling heatwave, where the old well we relied on very nearly dried up, he never took off the same thick jacket and cap.

Several volunteers came and went, while my friend and I stayed for as long as we could on this untouched island. My future husband even joined us towards the end of our stay. The two bedrooms, for male and female volunteers, were in the roof space, accessible via a ladder. We had an old gas lamp to light one room and a supply of gas bottles was delivered for cooking. Every morning I scooped a saucepanful of water from the well, leaving visitors bemused if they happened to pass by.

Each day we walked half a mile to a tiny shelter to count the number of visitors as they trekked across the long sandy beach. We greeted people and made sure the island wildlife was respected. Most visitors were well behaved, even when I told metal detectorists they couldn’t dig up the path, or sunbathers that families were complaining and they had to put their clothes back on right away! But we were most concerned about protecting the eggs of golden plovers, nesting along the shoreline. Their eggs can be difficult to see among stones and sand and they are extremely vulnerable.

Other tasks included monitoring orchids and feeding the resident flock of Soay sheep. I kept an eye on them when I found out that they’d been known to kill dogs and could be aggressive. But they proved to be lovely, trotting over when they saw me with my bucket of pellets, nodding their curling horns over dark brown woolly coats and looking at me with deep brown-black eyes.

The occasional walk around the whole reserve was spectacular. Often turning up rare plants among the sand dunes and salt marsh and myriad lichens in the forest glades. Once a week my friend and I walked up through the forest to catch a bus to go food shopping, with our supplies carried back in a rucksack, and on the odd occasion, we had to wade out at high tide. On some lunch breaks, we managed a cooling swim, but we were usually kept very busy. However, one break we were sitting on the rocks eating sandwiches in the beautiful Pilot’s Cove, when two of our college tutors, who’d taught us to canoe, paddled around the cliffs with a group of young people. Greeting us warmly in surprise, they asked if we’d like to borrow the canoes! We were delighted and jumped at the chance to canoe back around the island, gaining a different perspective on the cliffs and view across the bay.

I was reluctant to leave Llanddwyn – and the line from the 14 Century great romantic poet Dafydd ap Gwilym sums it up: ‘Nyd oes glefyd na brugol, Ael ynddo a LLanddwyn’ which translates to ‘Neither disease nor sorrowful countenance will follow a man from Llanddwyn’. 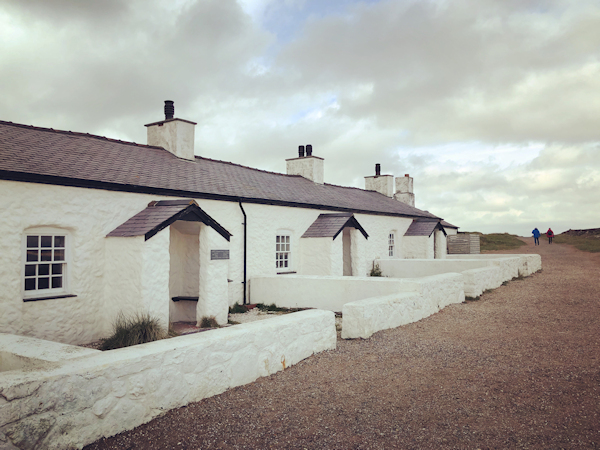 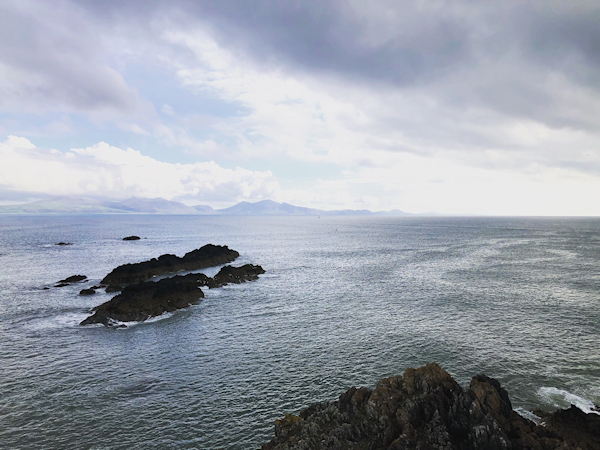 "Life on the Floodplain" is available to order from